Summary of the “Tourism in environmentally valuable areas” conference 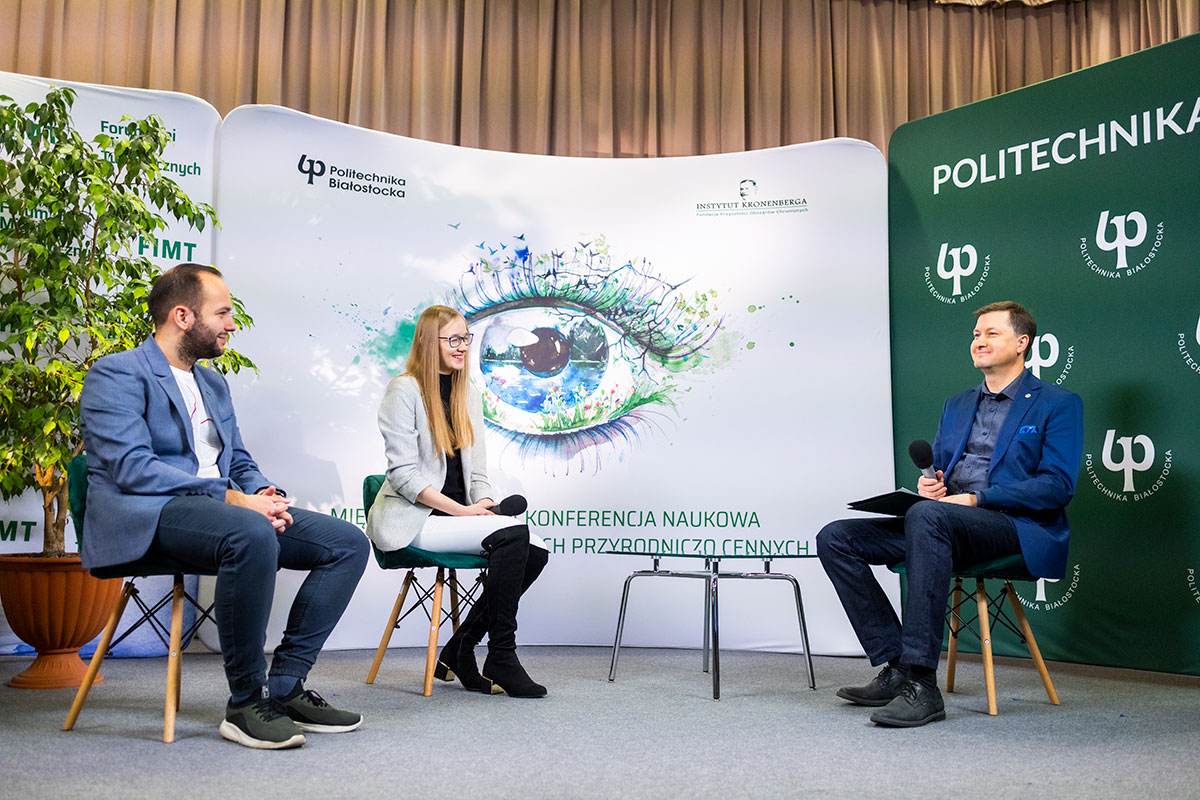 The three-day VII International Scientific Conference “Tourism in environmentally valuable areas” is over. The event, this year carried out online, brought together 240 registered participants from 121 scientific institutions, state-owned forest units, local government units and other institutions related to nature conservation and tourism. During the first two days of the conference alone, one thousand views of the broadcast on the YouTube channel were recorded.

The conference on 16-18 November 2021  was organised by the Institute of Forest Sciences of Bialystok University of Technology and the Kronenberg Institute – Foundation for the Future of Protected Areas.

For many years the conference has been an important forum for the exchange of views and visions on issues of sustainable development and tourism in naturally valuable areas.  This year’s meeting was attended by many leading experts from Poland and abroad, including scientists from Bialystok University of Technology and invited guests such as Professor   Tomasz Okruszko, DSc, PhD, Eng from the Warsaw University of Life Sciences, Prof. Przemysław Śleszyński, DSc, PhD from the Institute of Geography and Spatial Organization Polish Academy of Sciences, Cameron Sholly – Director of Yellowstone National Park and Juan Garibaldi – Director of Iguazu National Park.

Expert panels were accompanied by live meetings with experts. Such interdisciplinarity made the conference very attractive, which was emphasized by the Rector of Bialystok University of Technology, Assoc. Prof. Marta Kosior-Kazberuk, DSc, PhD, Eng during an inauguration of the event.

– The conference brings together scientific units, experts, local governments, business and institutions established to protect nature. And all this in order to look for effective ways of using nature’s resources while respecting it in the spirit of sustainable development – said Assoc. Prof. Marta Kosior-Kazberuk, DSc, PhD, Eng.

An important highlight of the first day of the conference was a session on the objectives of the European Green Deal. It was based on a dialogue between experts and scientists, who debated the programme’s assumptions in the context of our region and Poland. Another panel concerned the jubilee of the Ramsar Convention, which is still relevant despite being 50 years old. The culmination of the day was the 5th Kronenberg Gala, during which awards dedicated to science, local government and business were given. The PB-4-FUTURE 2021 Award was presented by the Rector of Bialystok University of Technology, Assoc. Prof. Marta Kosior-Kazberuk, DSc, PhD, Eng. The winner was , Assoc. Prof. Wiesław Urban, DSc, PhD, Eng from the Faculty of Engineering Management of Bialystok University of Technology, coordinator of the GoSmart project, lead by Bialystok University of Technology. Another award was presented on behalf of Artur Kosicki, the Marshal of the Podlaskie Voivodship, by Anna Krysztopik, Director of the Department of Environmental Protection in the Podlaskie Voivodeship Marshal’s Office. The statuette TOGETHER FOR ENVIRONMENT 2021 was awarded to the Mielnik Commune represented by the Commune Mayor, Marcin Urbański. The winner of the Kronenberg Award was Mariusz Ciołko, the owner of Villa Regent in Tykocin.

A strong accent of the next day of the conference was a module devoted to international solutions in tourism. Participants listened to speeches by the directors of Yellowstone National Park and Iguazu National Park, who shared their experience in managing these unique areas. The session was also attended by Dorji Dhradhul – Honorary Director General of the Tourism Board of Bhutan. He raised issues related to tourism and nature, based on Bhutan’s guiding philosophy of Gross National Happiness.

The 9th Tourism City Ideas Forum was also held that day. Experienced practitioners – local government officials – participated in a discussion on the flushing out of socio-economic functions of tourist cities. The session was moderated by Prof. Przemysław Śleszyński from the Institute of Geography and Spatial Organization Polish Academy of Sciences, who presented current research concerning, among others, depopulation of communes.

The last day of the conference was opened by a session of students from scientific associations of Bialystok University of Technology entitled “World 2050 – visions and dreams”. We could learn young people’s views on the challenges of climate change and pandemic. Another important topic was tourism in naturally valuable areas in times of pandemic. Through the analysis of data from the tourism sector carried out by researchers before and during the pandemic, changes in forms of tourism could be observed. The demand for agro- and ecotourism, as well as campervans, has increased. Hotels and holidays in the spirit of zero waste are in demand.

The concluding meeting of the conference confirmed the need for dialogue and cooperation in the field of sustainable tourism development in naturally valuable areas. Such conclusions were unanimously expressed by the representatives of the scientific community, business, regional authorities and nature protection institutions. Recommendations for the future included the need to introduce transparent legal regulations in the field of natural heritage protection, educating citizens through knowledge, and using good practices and solutions in exploiting the potential of natural resources.

– I think that tourism based on natural values and assets has a chance of success in our region and can become a very important element promoting its development. Every year, the value of our region, well maintained in terms of nature, allows us to look at it with more optimism – concluded Professor Sławomir Bakier, DSc, PhD, Eng, Director of the Institute of Forest Sciences of Bialystok University of Technology.

Conference organisers: Institute of Forest Sciences, Bialystok University of Technology and Kronenberg Institute – Foundation for the Future of Protected Areas.

Honorary Patronage: the Minister of Science and Higher Education, the Minister of Climate and Environment, the Minister of Economic Development and Technology, the Marshall of the Podlaskie Voivodship, the President of the National Fund for Environmental Protection and Water Management, the President of the Polish Tourist Organization, the Rector of Bialystok University of Technology, the Chairman of the Committee for Spatial Economy and Regional Planning, Polish Academy of Sciences, the General Director of the State Forests, the General Directorate for Environmental Protection.