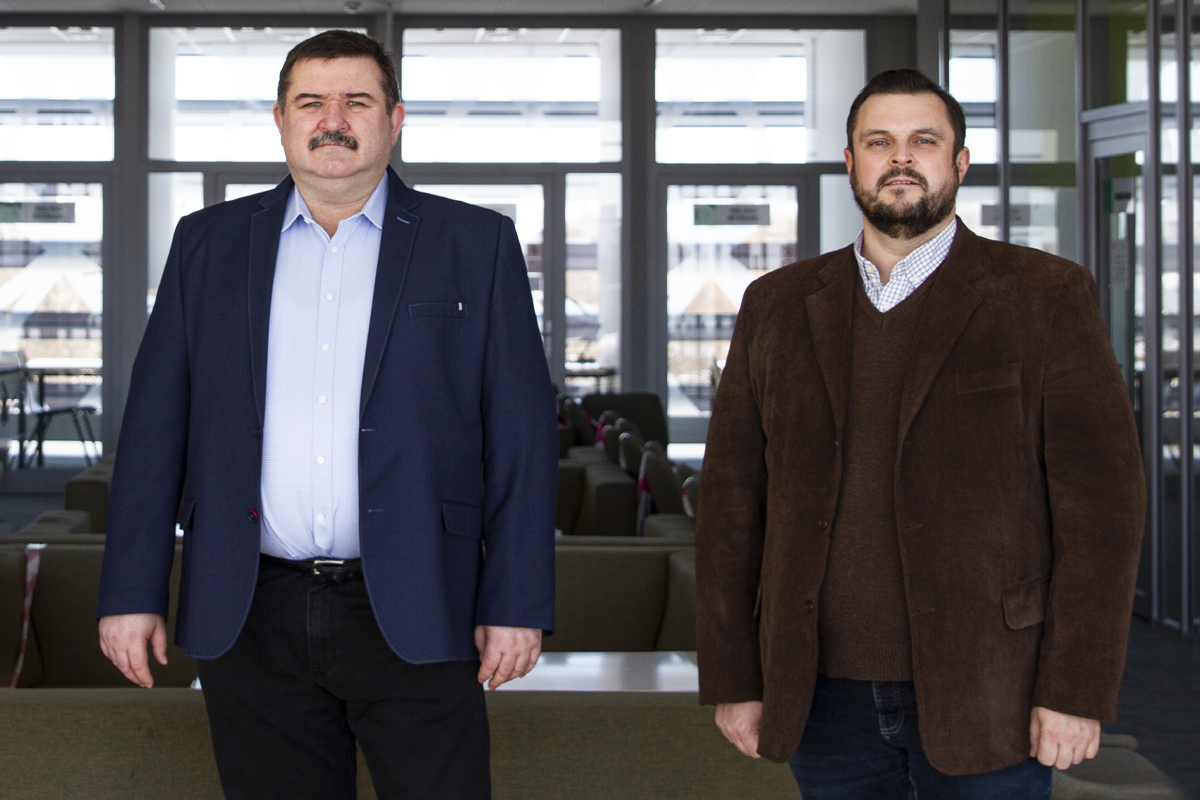 The use of UV-C radiation in autonomous robots is an innovative idea of scientists from Bialystok University of Technology, which has already found recognition in Poland and is now being developed in the form of the Protect Med project carried out together with the MSWiA (Ministry of the Interior and Administration) hospital in Bialystok.

Its advantages include the lack of use of chemicals for disinfecting rooms and objects in hospital rooms and corridors. Researchers use the unique properties of UV-C radiation.

– UV-C radiation is a high-energy radiation emitted by the Sun, but it does not reach the surface of the Earth – that is why it has to be produced artificially – explains Assoc. Prof. Maciej Zajkowski, PhD, Eng, head of the Department of Electrical Power Engineering, Photonics and Lighting Technology at the Faculty of Electrical Engineering of Bialystok University of Technology. – It works very similarly to gamma radiation, i.e. it is high-energy and thanks to this it can quite significantly destroy harmful substances, destroy DNA or RNA of various pathogens. The virus loses its properties, disintegrates and is no longer alive. In addition, this radiation can destroy, for example, the DNA structure of very sensitive bacteria or fungi or moulds.

The properties of UV-C radiation were used by scientists from Bialystok University of Technology when building RobUV – a remote-controlled, mobile device that disinfects and decontaminates, i.e. cleans the air and any surfaces in rooms from harmful substances. It is based on the technology of UV-C emitters recommended by the World Health Organization (WHO) to destroy, among others, the COVID-19 coronavirus. The robot effectively kills bacteria, microorganisms, viruses, and thus all pathogens having DNA code.

The prototype developed at Bialystok University of Technology has attracted the interest of ZURAD, a company owned by the Polish Armaments Group. Bialystok University of Technology has granted ZURAD an exclusive licence for two years. The pre-production prototype is now awaiting certification and detailed testing. There are plans to develop a portable version for decontamination of ambulances or smaller rooms.

The intelligent device is able to identify the space it is in and adjust, in the case of the RobUV robot, the level of intensity of UV-C irradiation to specific surfaces, set appropriate times for disinfection, prepare appropriate doses of radiation for specific pathogens.

RobUV has won the Defender Award for the most innovative and promising products enhancing national security at the 28th International Defence Industry Exhibition MSPO 2020 in Kielce.

In order to develop the idea, our scientists have also established cooperation with the MSWiA hospital in Bialystok to develop an entire system for the protection of patients and medical staff. They called it Protect Med.

– It is a complete system supporting registration of patients in a safe way, even those infected with any pathogen – explains Assoc. Prof. Zajkowski, DSc, PhD, Eng – We have robotic solutions that allow for easy, fast, efficient and almost autonomous disinfection of surfaces and continuous disinfection of air in hospital rooms. For this purpose, we use UV-C radiation, which decontaminates harmful substances and pathogens in a chemical-free way. The innovation here is to give such mobility and automation to the radiation that is emitted from emitters, from our light sources that we have prepared for uniform illumination and irradiation of surfaces. This is all about full automation and the possibility of remote control.

How does an autonomous robot move in space?

The details of the innovativeness of the project of our scientists are explained by the co-creator of all RobUV versions – Assoc. Prof. Kazimierz Dzierżek, DSc, PhD, Eng from the Department of Robotics and Mechatronics of the Faculty of Mechanical Engineering of Bialystok University of Technology.

– RobUV is an intelligent device because it disinfects rooms autonomously, selects the route indicated by the operator, avoids obstacles and also intelligently selects the radiation dose which is necessary to disinfect the room – says Prof. Dzierżek. – It is very slow and very strong, therefore it can overcome various thresholds, obstacles without human intervention and disinfect rooms on its own.

How is this possible?

– The robot is equipped with a set of sensors which allow it to drive autonomously through the corridors of the facility,” says Piotr Kardasz, PhD, from the Computer Laboratory of the Faculty of Electrical Engineering at Bialystok University of Technology. – Eight ultrasonic distance sensors are arranged around the robot at its base.

They allow to detect the distance from the nearest wall or some other object that is in the vicinity of the robot. There is also a camera with a laser distance sensor, which allows it to detect obstacles in front of the robot at a height greater than the ultrasonic sensors.

– This makes it possible to detect, for example, a human being in front of this robot – says P. Kardasz.

The sensors allow the robot to move autonomously along the corridor on the basis of a map that is contained in the robot’s memory.

– Ultimately, it will be possible to teach the robot such a corridor and store this map in such a way that it will be able to move along the learned corridor autonomously – continues P. Kardasz.

In cases the robot needs to be manually moved from one place to another, it is equipped with a long-range remote control set – identical to the one used by model makers. It allows for manual control of the robot and moving it, for example, between hospital wards – where there is no preloaded map of the area and it cannot move on its own.

The robot moves thanks to two wheels driven by a brushless motor. As a result, it is quiet and is able to move very efficiently on different surfaces.

– It is a construction based on three wheels – two driving wheels and one supporting wheel, thanks to which we always have one hundred percent contact with the ground, convinces Maciej Rećko, MSc from the Department of Robotics and Mechatronics of the Faculty of Mechanical Engineering at Bialystok University of Technology, co-creator of RobUV. – The construction is stable – it does not topple over.

The RobUV robot designed to disinfect air consists of a chamber containing sources of ultraviolet radiation, which is double-closed, and that prevents this light from escaping outside the device. It ensures safe use of this robotic kit. The robot consists of a base and a tower, whose task is to purify the air.

– Additionally, the RobUV system will consist of a robot which will be used to disinfect surfaces – Rećko reveals. – There, ultraviolet rays are already completely visible, and therefore it has to perform actions under remote supervision, so that no person stays in the room during decontamination. The decontamination process itself will be carried out automatically and, for safety reasons, if an intrusion into the room to be cleaned is detected, the radiation sources will be disconnected.

RobUV is powered by batteries with a voltage of 24 volts, which is then converted to AC voltage which powers the radiation sources.

– Without charging, the robot will be able to run for over two hours in a continuous decontamination mode. If we stop the robot in a selected place and connect it to an external power source, it will be possible to decontaminate the air and charge the batteries simultaneously – predicts M. Rećko.

– I think that the prototype of the device should appear in the MSWiA hospital at the turn of 2021/2022, predicts Prof. Zajkowski. – In January 2022 we will make the first tests and from February we want to introduce testing by medical staff and patients.

– Initial prototypes of the robot have already been tested in the hospital, now we are working on the final version of the prototype which will be tested longer in the hospital – adds Prof. Dzierżek. – This is a device which will disinfect the air and will be able to move between people in the corridor. This robot will come to the hospital in December for testing. The second robot for disinfecting hospital rooms, beds and wardrobes will be put to the test around February and will be semi-autonomous, as it will move over short distances in a given room.

Meanwhile, you can cast your vote for “UV-C technologies at Bialystok University of Technology in the fight against the Covid-19 pandemic – Bialystok University of Technology” in the voting for the Podlasie Consumer Brand (Podlaska Marka Konsumentów) – one of the elements of the Podlaska Marka (Podlaska Marka) Award – one of the oldest and most prestigious plebiscites taking place in the region, organised continuously for 14 years by the Marshal of the Podlasie Voivodship and invariably enjoying great interest from regional producers and consumers.